Your Field Has Been “Bugged” 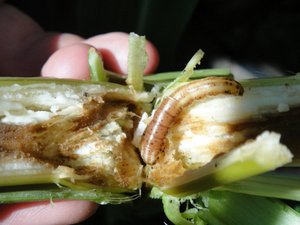 Crop monitoring has always been an important part of raising top yields. That’s why keeping day to day tabs on what’s happening in growers’ fields not only protects yields, but supplies reams of information for future use. As farmers get larger and demand for their time increases, it becomes even more difficult, yet imperative, to have someone (or in this case, something else) other than the farmer himself gather the information for them. It’s both difficult and expensive to find someone you can totally trust who is qualified to do the job of crop scouting as accurately and as efficiently as today demands. So news of getting help in that area will be welcomed by most 21st century growers.

Due to the marvels of modern technology, a whole new army of truly professional crop scouts may be on their way to your farm. And who better to inspect your fields than the real professionals who know more about a specific crop than anyone who learned it in a classroom.

Every year, fields are alive with many different species of insects; many of them aeronautical wonders of nature. In fact, with the body shapes and styles that most of them possess, they have no business flying. Take the typical housefly for example. Its wings oscillate at more than 200 times per second making them difficult to hit with a fly swatter and nearly impossible to capture with your bare hand. They don’t look like they’re built to move that fast, but neurological designs inside the fly, which we know little about, allow them to pull it off. As far as flying field beetles are concerned, whoever thought that any of these hard shelled carcasses could get off the ground, let alone stay within any one zip code during a windstorm? But they can fly very well and that’s where our opportunity lies.

According an article written by Michel Maharbiz and Hirotaka Sato in the December 2010 issue of Scientific American magazine, researchers working in the field of micro and nanotechnologies have discovered that by placing tiny cameras on the backs of beetles and other flying insects, they can record everything in the presence of the bug at any time. In fact, according to the article, military and law enforcement departments are particularly interested in this kind of innovation since all they would need to do is release some of these flying television cameras into a room to see what’s going on. For example, they could see immediately how many people are inside, what they look like and if they’re armed. But the best part of all is that with some minor manipulations of the insect’s navigation system, they can also control where the insect goes. This idea will put a whole new meaning to the phrase “Your room has been bugged.”

So just imagine the future where you not only purchase the seed you need, but at the same time you also place an order for hi-tech camera carrying bugs to be released into your fields at periodic intervals throughout the season. They could do a much better job of covering the entire field while accurately reporting exactly what they see every second. Picture yourself releasing a batch of stealthy ladybugs early in the season when the crop is small. Farmers love ladybugs for their voracious appetite because they consume other dangerous plant damaging insects such as aphids, and in doing so, protect the crop. These portable television screens can tell you, for example, when aphids are present. Honeybees could be released into a crop that is getting ready to flower. Who better to take you right to the plants that are most advanced in the field to tell you what stage that crop is in and how many flowers are on the average plant. All of that information would be transmitted to a receiver in your office or to your handheld device, giving you up to the minute status of every field. Sound far fetched? It’s not. The camera bugs are already being tested.

“Camera bugs” are just one of hundreds of new and exciting breakthroughs you can look forward to in the future. And many of those innovations are going to dramatically change the way you farm. That’s why one of our most important jobs at AgVenture is to keep our customers abreast of the latest information that they may not have access to. Our job is to make sure you stay ahead of the game and in the lead, because when you’re in the lead, everyone else gets to follow.

« ROI The Biggest Factor in Farming Success!
The Top 5 Factors to Producing a Top Crop »