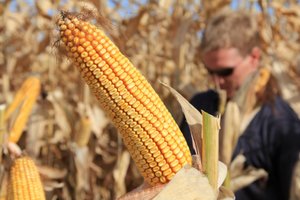 Researchers led by Hania Elitriby, director of Cairo’s Agricultural Genetic Engineering Research Institute have genetically engineered maize plants to produce a protein used to make the hepatitis B virus vaccine, SABC News reports.  They hope their findings could eventually lead to a local, inexpensive and edible vaccine.  The plants produce the protein which elicits an immune response against the hepatitis B virus.  The scientists are now attempting to increase the amount of the progestin produced by the plants. Testing the vaccine in animals and humans started in 2011.  More than a billion people are infected with hepatitis B, and about 350 million of these are at high risk of serious illness and death from liver damage and liver cancer.  Edible vaccines produced by plants would be cheaper and would not need to be refrigerated.
This is the future for farmers.